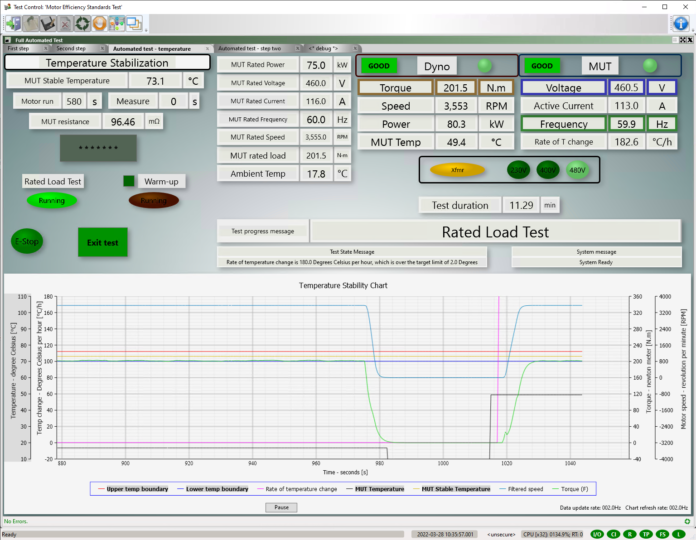 SAKOR Technologies Inc., a recognized leader in the area of high-performance dynamometer systems, announces the release of the DynoLAB™ GenV next generation test automation controller, which allows even a non-programmer to implement complex test systems and testing standards. Delivering a new benchmark in modularity, performance, robustness, and expandability, DynoLAB GenV is built on the latest Windows technologies and development tools in full compliance with current information technology standards.
The new DynoLAB GenV can be used with a wide array of hardware, including power
analyzers, resistance meters, high potential (hi-POT) testers, ECU’s, video control units, and emissions analyzers. The fully networked test automation controller can operate several different devices independently, so users can perform multiple tests simultaneously, often with a single DynoLAB GenV controller.
Each DynoLAB GenV execution unit is an independent module, which provides superior
software robustness. The system is completely scalable, so performance takes advantage of faster processors, larger memory, and more processor cores as they become available.
The powerful new automation controller features multi-monitor, multi-window, and multi-tabbed displays that allow the test sequence to be laid out in the most appealing and ergonomic manner.
With its modern intuitive interface and powerful graphical test sequence editor, test engineers and technicians can easily design and implement complex automated test sequences without the need to learn a programming language or employ a professional programmer. Tests can be edited or created online or offline and the user interface and displays can be modified while the test is executing. Users can export test sequences, hardware channel sets, and unit definitions for offline test editing. SAKOR uses its advanced user experience feature to teach operators and engineers how to quickly configure and run tests.
“We are excited about the launch of our new DynoLAB GenV product,” said Randal Beattie,
president of SAKOR. “Building on our decades of testing experience, the new controller allows customers to automate much larger and more complex systems than ever before, with a cost and expandability not available in the market until now.”

SAKOR Technologies Inc. is a recognized leader in the manufacture and development of reliable and cost-effective automated test instrumentation systems for a wide range of applications. For over 35 years, the company has been providing quality products and superior customer service to a variety of markets including automotive, hybrid and electric vehicle, military, aerospace, marine, heavy equipment, performance racing, electric motor, consumer appliance and more.